At the New Museum, various negotiations made by the editors of and contributors to the Dictionary of Untranslatables —including Emily Apter, Jacques Lezra, and Michael Wood—were highlighted in the exhibition, signaling some of the challenges associated with creating an English-language version of Vocabulaire for a primarily Anglo-American readership.

Alongside these personal editorial correspondences, the Center also made available for browsing the Arabic version of Vocabulaire, in addition to copies of entries for select terms that have or will appear in Brazilian Portuguese, Romanian, Spanish, and Ukrainian versions of the text. This Six Degrees post focuses squarely on the forthcoming modern Greek version of Vocabulaire in order to provide further entry into some of the demands that difference directs to us through acts of translation. Her scholarly focus on the specificities of translating between Greek and Western languages over time—a history as intricate and troubled as they come—offers one pathway through the interminable and ever-shifting relationships between languages that engender untranslatables.

From one language to another, the situation is definitely that of scattering and confounding.

Despite fratricides, we campaign for universal fraternity. Despite the heterogeneity of idioms, there are bilinguals, polyglots, interpreters and translators. The operation of translation is imbued with a curious paradox.

Translations take place even though untranslatability is an essential characteristic of every articulated message. As Ricoeur points out, the situation among languages is one of scattering and distancing, of perplexing and confounding. At the same time, translations have never ceased entering the scenes of history.

The paradox of translation lies in this conjunction of the historical and the impossible. They take place despite the differences of tongues, including those that divide past and present; despite cultural diversity; despite the grounding of languages in the concrete social conditions of their constitution; and finally, despite all political divisions that reinforce linguistic frontiers.

Untranslatables, as Cassin suggests in her preface, are not terms that cannot be translated but terms that we never stop not translating.

In other words, they are terms that enter into historically diversified relations of equivalence and sustain translations that are posited as mutually antagonistic and highly contested. Vocabulaire , an exercise on how to philosophize in and through translation, both invites and demands translation into different European and non-European languages. Far from being a philosophical lexicon that merely offers translations of terms into different European languages, Vocabulaire contends that philosophizing is mediated by translation and cannot take place outside its limits.

In addition, it will also entail rewriting the analytical part of the entries to include traditions and modes of philosophizing associated with the specificity of modern Greek vocabularies. This investigation in the modern Greek version of Vocabulaire shifts attention to the second task involving a focus on the history of philosophy and the relation between history and philosophy. Central to this enterprise is the relation between ancient and modern Greek philosophy and language, as formulated against the background of the Greek legacy of European philosophy.

The relation in question is bidirectional.


It involves the modern Greek translational encounter with antiquity on the one hand, and the European genealogical confrontation with Greek philosophy, on the other. Modern Greek terms deployed as equivalents to ancient ones were formed in and through their relation to European translations of antiquity. This was a relation of imposition and colonialism inscribed into translation but also one of conflict, defiance, and resistance. Photo: Jay Bergesen Greek intellectuals, he explains, represented the modern Greeks as heirs of antiquity in order to trace a direct relationship with modern Europe and thus pleaded for acceptance of the modern nation by the West.


While this view allows us to recognize the imperialist violence of Western humanist modernity, it presupposes an unconflicted vision of both the project of modernization and the modern European confrontation with antiquity. In other words, it presupposes the translatability of terms that constituted European modernity both in diachrony and in synchrony. But this evocation of translatability can only make sense in the context of the relationship between center and periphery and of the linear temporality of progress toward the modern implied by this relationship.

For scholars of the Greek Enlightenment, European philosophical vocabularies were unified because Europe was transformed into a de-historicized paradigm, dissociated from historical temporalities. Classical studies became the key to the stabilization of European thought and history by reducing the process of modernization to an inaugural classical moment. Yet to what extent can we maintain this opposition between a static European encounter with the Greek past and a modern Greek appropriation of antiquity, one that is constantly in the making? 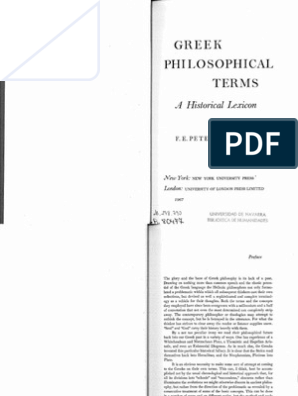 The concept of untranslatables invites us to investigate how conflicts underpinning the presumed belatedness of the modern Greek engagement with antiquity—conflicts between religious and secular readings, between tradition and modernization, and so on—were not absent from what we understand as European modernity and its relationship with antiquity. This rewriting implies that Greek translators strategically challenged and undermined the professed unity of the European philosophical vision going back to ancient Greece.

By focusing on untranslatables as they appear in modern Greek translations of European vocabularies, it is thus possible to highlight the internally differential and conflicting constitution of the European vision of antiquity. Unlike similar terms, such as cultural pluralism, multiculturalism, hybridity, transnationalism, or creolization, which are usually deployed to denote the reflexive or unconscious mixing of categories and identities as well as the dynamic interchange of symbols and practices, the term syncretism indicates a conflict that is ultimately insoluble.

By considering syncretism as a corroboration of philosophical untranslatables, the modern Greek Vocabulaire attends to the conflicts, incomplete amalgamations, and contingent exercises of translation that characterize the constitution of modern Greek culture and identity. At the same time, it leads us back to the divided European context of philosophical terms and the conflicting routes of translation that comprised European philosophy and history. Modern Greek philosophy did not translate a unified or unifying European vocabulary, either with regard to antiquity or with regard to modernity.

Anthony Pagden, author and professor of political science and history, notes that Europeans have more than a shared past; they have a shared history of antagonisms that not only includes the old struggles for control of Europe or for empires overseas but also the more immediate experience and memory of two world wars.

How did this concept of Europe compare to the diversity of translations that made Europe a contested concept—in other words, a concept that is to be used in the plural? Which aspects of the ancient heritage were set aside and dissipated to sustain the genealogical link between Greek antiquity and European modernity? The American scholar F. He was educated at St. Louis University and received his Ph. Peters has written about classical civilizations in the Middle East and Near Eastern urbanism, and about the religion and culture of Islam, especially during the Early Period.

Please order through the Abebooks checkout. We only take orders through Abebooks - We don't take direct orders by email or phone. Refunds or Returns: A full refund of the purchase price will be given if returned within 30 days in undamaged condition.